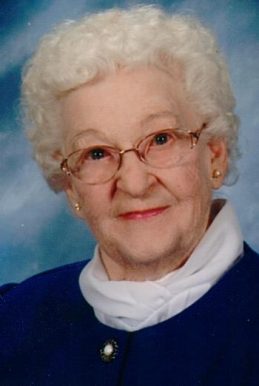 Marjorie was a member of First Christian Church since 1950.  She served in several Christian Women’s Fellowship offices and will be remembered for many great meals for the church.  She also taught Sunday school for several years.  She worked as the office receptionist for Drs. J.A. and Paul VanKirk.  And she worked as office receptionist for the dentist Dr. Lyle Bailey.

Her Christian walk led her to be a servant caring for her parents, her sister, Lelia, and her brother Curt Day the World Champion Horseshoe Pitcher.  She also cared for many neighbors and friends.

One of Marjorie’s great joys and accomplishments was serving as a Girl Scout Leader for over 15 years.  She took her Troop 2 to many places and taught them lasting life lessons.  One fantastic trip included going to the National Girl Scout Camp in Washington D.C., seeing the sights in Washington D.C., the Liberty Bell in Philadelphia and a grand tour of New York City including the Statue of Liberty.  Many of her scouts went on to be Girl Scout Leaders.

Visitation will be 4-7 p.m. Thursday, December 29, 2016 at Goodwin Funeral Home. Services will be 1:30 p.m. Friday, December 30th at the funeral Home. Burial will be in Bunnell Cemetery. Memorial donations may be made to the First Christian Church or Frankfort TPA Park, envelopes will be available.