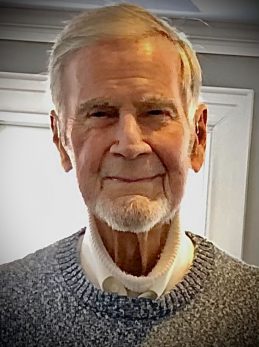 Jack Douglas Scheid, loving husband, devoted father, grandfather, and great-grandfather went to be with his Lord and Savior on July 9, 2022.

Jack was born on August 26, 1932 in Athens, OH to C. Douglas Scheid and Marian Hurd Scheid.  Jack was a graduate of Frankfort High School, and Indiana University, where he was a member of Phi Kappa Psi Fraternity.  He was a lifelong Indiana Hoosiers fan and 45-year member of the Varsity Club.

He married his college sweetheart, Connie Feallock Scheid, on December 23, 1954 in Michigan City, IN.

A man of faith, Jack was a long-time member of First Evangelical Presbyterian Church in Frankfort, IN where he served as both Deacon and Elder, and recently joined College Park Church in Indianapolis.  He was a member of Gideons International, as well as the Interdenominational Men’s Prayer Breakfast for over 30 years.

Jack was the President of Scheid Olds Cadillac and served as President of the Central Indiana Oldsmobile Dealers Marketing Association in 1971 and 1972.  He was active in the Frankfort Chamber of Commerce, and the Frankfort Development Corporation. Jack also served on the Board of Directors of the Clinton County Bank and was Chairman of the Board of Summit Bank in Frankfort.

Jack served his community through a variety of service organizations. He was a 50-year member of the Rotary Club of Frankfort, serving as Secretary, as well as a member of the Frankfort Jaycees, Chairman of the Rotary Babe Ruth Baseball program, and a member of The Loyal Order of Symposiarchs.  Jack was a Big Brother for 7 years.  He received the 2005 Robert P. Murray Award, and was on the Board of the Salvation Army, the On-Stage Foundation, and was President and Drive Chairman of the United Fund of Clinton County.

The family would like to thank his incredible caregivers, Corrine Hampton (Coco) and Dawn Ashcroft for their unconditional love and devoted care.

On Sunday, August 7th the family will hold a private service followed by a Celebration of Life for friends and family from 4:30 PM to 7:00 PM at Arborwood, 100 Golf Preserve Ln, Frankfort, IN 46041.  Goodwin Funeral Home, 200 S. Main Street, Frankfort is honored to assist the Scheid family with arrangements.

Jack was preceded in death by his parents, Nancy Neumayer (sister), and his beloved wife, Connie.