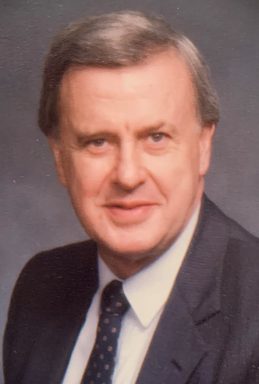 Fred was a 1950 graduate of Frankfort High School, a 1954 graduate of Indiana University and a graduate of the School of Banking at the University of Wisconsin.  He was a veteran of the U.S. Air Force serving from 1954 – 1956. Mr. Agnew was the former President and Chairman of the Board of The Farmers Bank, Frankfort, Indiana. Prior to becoming associated with The Farmers Bank, Fred worked in sales with The Ingram Richardson Company in Frankfort.   He was a member of Phi Kappa Psi fraternity at I.U. and formerly attended the First Evangelical Presbyterian Church.  Mr. Agnew was an avid golfer, fisherman and member of the Frankfort Symposiarchs and Frankfort Rotary Club.

No Services are planned at this time. If you feel so inclined, please make a memorial donation to the charity of your choice.

In addition to his parents and his wife, he was preceded in death by an infant daughter, Kathryn Ann Agnew and a sister Judy Stephic.