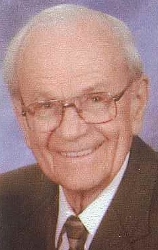 Bill graduated from Rossville High School in 1944 and Purdue University in 1949 with a bachelor’s degree in Ag-Econ.  While at Purdue, he was inducted to the Alpha Gamma Rho fraternity.  Bill was a lifelong Clinton County resident. He served in the United States Navy as an Aviation Electronic Technician’s Mate 2nd Class from 1945-1946 during World War II. William was President, Co-Founder and Co-Owner of Beard Industries, Inc. (with his wife, Jean) from 1966-2003. He served for nine years as Clinton County Commissioner. Bill was a member of Frankfort First Christian Church (Disciples of Christ), Beard Masonic Lodge 641, Eastern Star, Frankfort Country Club, Clinton County Chamber of Commerce, and Kiwanis. William served as former President of the Clinton County YMCA board–bringing a YMCA to Frankfort was a project that was near and dear to his heart. He also served as President of Frankfort Kiwanis, and former Chairman, Elder, and Deacon of First Christian Church. Bill served continuously on the board of directors of On Stage Foundation (Red Barn Summer Theatre) since it started in l968—attending nearly every production and looking forward to the upcoming season. He served on the Clinton County Economic Advancement Foundation (CCEAF) and was a past board member of the Clinton County Community Foundation. He was a lead contributor in bringing an Ivy Tech Community College to Frankfort. William was the recipient of numerous community service awards, including the Frankfort Times 1989 Citizens of the Year, Purdue Alumni Association Citizenship Award 1996, Frankfort Key to the City presented by former Mayor Roy Scott, “Clinton County Gems” Award 2008, Purdue Agricultural Alumni Association Certificate of Distinction 2011, Kiwanis International Foundation Heritage Society and Tablet of Honor, Kiwanis International White House Champion of Change 2012, and The Frankfort Legend Award 2015.

Visitation for William will be held on Thursday, December 22, 2016, from 4:00 – 8:00 p.m. at Frankfort First Christian Church, 58 S. Columbia Street, Frankfort, IN. Funeral service will be held on Friday, December 23, 2016, 1:30 p.m. at Frankfort First Christian Church with Pastor Pamela Ditson-McCall officiating. Burial will be in Hopewell Cemetery. Memorials in William’s name may be made to Clinton County YMCA, 950 S. Maish Road, Frankfort, IN 46041 or a charity of your choice.