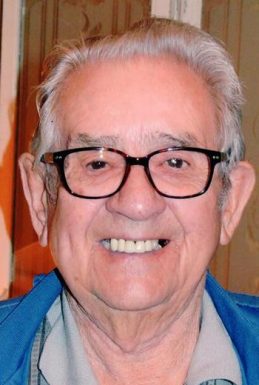 William E. “Bill” Keeney 86 of Frankfort, died at 11:15 p.m. Monday October 3, 2016 at St. Vincent Frankfort Hospital. Born November 22, 1929 in Clinton County, Ind., to the late William E. & Mable L. (Lewellyn) Keeney.   He married Ilo G. Padgett on February 1, 1951, and she preceded him in death on September 20, 2006.  Bill was a 1948 graduate of Frankfort High School.  A veteran of the U.S. Navy, serving from 1950-1953 during the Korean War, he served on the USS Bennington and was stationed in Jacksonville, Fla.  Before joining the Navy, Bill worked at Milner Packing Company, and was an apprentice with the New York Central Railroad.   Bill was owner-operator of Keeney’s Standard in Frankfort, for 35 years, retiring on July 31, 1989.  He was a member of the First Christian Church, past member of the Moose, Elks and Frankfort Country Club, past president of Frankfort Optimist, current 50+ year member of American Legion.  Bill enjoyed woodworking, golf, was an avid Colts & Pacers fan and enjoyed watching his grandchildren’s school events.

Visitation will be 4-7 p.m. Friday, October 7, 2016 at Goodwin Funeral Home. Services will be 10:30 a.m. Saturday, October 8th at the funeral home. Pastor Pam Ditson-McCall and Jill Carroll will officiate. Burial with Military Rites will follow in Bunnell Cemetery. Memorial donations may be made to Guardian Angel Hospice or Clinton County United Way; envelopes will be available.