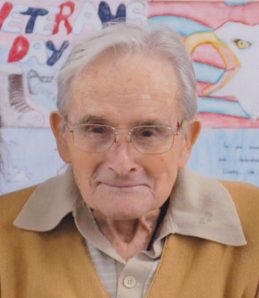 William Earl Campbell, 95, of Crawfordsville went home to be with the Lord on Saturday, January 14, 2017.  He had been surrounded in recent days by family and friends who love him and will miss him greatly, and he had family at his side when he passed away.  He was born May 17, 1921 in Stockwell, Indiana.  He was the sixth and youngest child and only son of Earl and Mary (Butler) Campbell.  He graduated from Frankfort High School in 1939 and was a cheerleader for the 1939 Frankfort State Championship Basketball Team.  He married Beth Jean Miller in Mulberry, Ind., on June 20, 1942.  She passed away on November 24, 1993.

Bill served as a Staff Sargent in the US Army from 1942-1945, protecting the Panama Canal during World War II. When he left to serve, he left behind his 18-year-old bride Beth, his job at the telephone company, and his parents and siblings. After training in New Orleans, he boarded a boat with no idea where they were sending him.

He returned to civilian life in 1945 and resumed his career with AT&T and Indiana Bell, where he would work for another 38 years until his retirement in 1982.  Bill remained active in the Telephone Pioneers volunteer organization until the end of his days.  He was a long-time member of St. Luke United Church of Christ in Frankfort, serving as an Elder, Trustee, and Sunday School teacher.

Bill loved woodworking, refinishing furniture, and playing golf in his spare time.  He enjoyed visiting with others, traveling all over to spend time with family and friends, and helping them all in any way he could.  He was honored to participate in the WWII Veterans Honor Flight to Washington D.C.

Bill leaves behind a legacy of love and joy, often commenting in his last few months that he was the most blessed man in the world for having the family and friends that surrounded him.  Those of us that knew him know that we are the ones who are blessed for having had him in our lives.

Visitation will be on 12 Noon-2 p.m. Wednesday, January 18, 2017 at Goodwin Funeral Home, Frankfort, Indiana. Services will begin at 2 p.m. at the funeral home, with Pastor Scott Highlander from St. Luke United Church of Christ officiating. Burial will follow at the St. Luke Cemetery, next to his beloved wife Beth. Donations in lieu of flowers may be made to St. Luke United Church of Christ in Frankfort, Indiana.