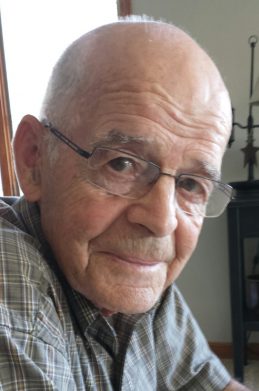 Willard R. Wilson, 87, of rural Frankfort, died at 7:48 a.m., September 10, 2017 at Wesley Manor.  Willard was born on June 27, 1930, in Orleans, Indiana, to Raymond and Ruby (Phillips) Wilson, along with his twin brother Willis, joining older brother Ralph Wilson.  When the Wilson boys were toddlers, their mother passed away suddenly.  Willard and his brothers were raised by their maternal grandparents and their maternal aunt, Gwen.  In his teenage years, Willard began to work for Walt and Lucile Uitts of Scircleville, and made his home with their family.   The Uitts family gained a son and brother, and Willard gained three sisters.  Willard was an alumni of Sugar Creek High School, and completed his GED through Rossville High School.  He married Marilyn L. Black on December 5, 1954, in the Moran Methodist Church.  He was a truck driver and farmer, and after retiring from farming he worked at Mack Machine for several years. Willard was affiliated with Pleasant Hill Presbyterian Church, and was formerly a 50+ year member of Geetingsville Presbyterian Church, having served as both an elder and deacon.  Willard was also a 50- year member of Beard Lodge 641, F&AM, as well as 32nd degree Scottish Rite, Murat Shriners and Loyal Order of Moose.  Willard formerly served as a Master Sergeant in the Indiana National Guard.

Visiting will be 4-8 p.m. Thursday, September 14, 2017 at Goodwin Funeral Home and one hour prior to the service on Friday. Services will be 11 a.m. Friday, September 15th at the funeral home. Burial will be in Bunnell Cemetery. Memorial contributions may be made to the Community Foundation of Clinton County (AJ Archibald Memorial Scholarship Fund) or to a charity of donor’s choice.