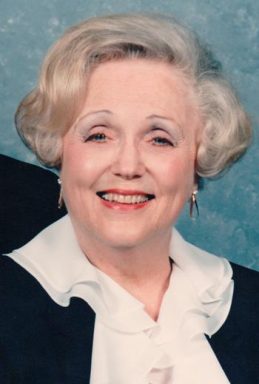 Virginia was a 1941 graduate of Jackson Township Schools. While in high school she sang with a women’s trio, the HOH Trio, comprised of Virginia, her sister Betty and friend Betty Ohford, winning a talent contest that awarded them an on-air performance at WLS in Chicago. She grew up in Jackson twp and lived in Frankfort, Rossville and Monticello for 32 years before returning to Frankfort in 1984. While in Rossville she had a large vegetable garden and canned much of what she grew for family and friends. In Rossville she was den mother for a her son’s cub scout troop and was active in the First Presbyterian Church where she sang in the choir and taught Sunday School; during this time she worked out of her home conducting interview-based research for the National Opinion Research Center affiliated with the University of Chicago.

Virginia was a loving wife, mother, and grandmother. Following the death of her parents she annually hosted her extended family’s holiday dinners for over 50 years. After raising their family, she and her husband enjoyed a number of European excursions and Caribbean cruising adventures. She enjoyed antiquing at local auctions. She was an active member of the First Evangelical Presbyterian Church of Frankfort. She led Bible study groups in her home and was co-founder of Rainbow Haven, on the Board of Directors for Wesley Manor and was a member of Tri Kappa in Monticello.

Virginia greatly enjoyed being a grandmother to her two granddaughters, Rachel and Emily. Favorite pastimes included teaching them about country life by taking them to the annual Clinton County 4H fair, teaching them to cook and sew, and spending time with them.

The Van Tyle family would like to thank Ginnie and Tom Grosswiler, Pam Kirby and Promise Home Services and Connie Alexander of Guardian Angel Hospice Care for their loving care of our beloved mother and grandmother.

A Celebration of Life will be held at 11 a.m., Saturday, March 25, 2017 at the First Evangelical Presbyterian Church, 352 W. Clinton St., Frankfort, Indiana. The family will receive friends following the service in the church Fellowship Hall. Private family burial will be in Green Lawn Cemetery. In lieu of flowers, memorial donations may be made to the Clinton County Cancer Society, 241 S. Broadway St., Frankfort, IN 46041 the Neighborhood Christian Legal Clinic, 3333 N. Meridian St., Indianapolis, IN 46208 or www.nclegalclinic.org, the Clinton County Humane Society, P.O. Box 455, Frankfort, IN 46041, the Southern Poverty Law Center, 400 Washington Ave., Montgomery, AL 36104, or a charity of your choosing.