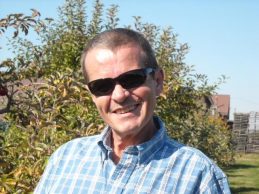 Tony attended Frankfort High School, receiving his GED in 1982.  He was a lifelong Frankfort resident.  A veteran of the U.S. Army, he served from 1975-1977.  Tony worked for Custom Building Products for 17 years.  He loved spending time with family and being outdoors.  He enjoyed model cars, old advertising memorabilia, attending auctions and classic rock music, especially The Beatles.

Memorial donations may be made in Tony’s honor to the Clinton County Cancer Fund with envelopes available at the funeral home.

Funeral Services will be held at 11 a.m. Saturday, October 7, 2017 at Goodwin Funeral Home in Frankfort.  Friends may visit from 6-8 p.m. Friday, October 6, 2017 at the funeral home.  Burial will be in Whiteman Cemetery.