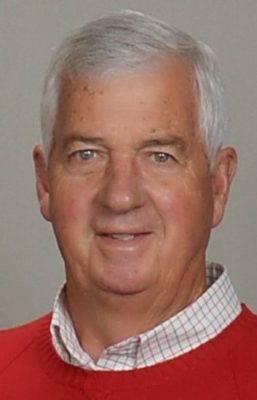 Timothy Lee Wolfe, 70, of Frankfort, IN passed away on Wednesday, May 23, 2018.  Always a picture of health his death was unexpected.  Tim was born November 25, 1947 in Winchester, IN to the late Glenn and Mary (Comer) Wolfe.  He married Sue Hendrickson on June 22, 1969. Tim was a 1965 graduate of Union High School in Modoc, IN and a 1969 graduate of Purdue University with a degree in Ag Econ.  He also received his Master’s Degree in Ag Econ in 1972 from the University of Arizona, Tucson, AZ.

Tim retired from The Farmers Bank in 2012 after 10 years as the Senior Agricultural Lender. Prior to that he worked for 20 years as Operations Manager of Crum Enterprises.

Tim was raised on the family farm in Modoc, IN and enjoyed “hobby farming” with his brother-in-laws Jim and Steve during retirement.  He and his wife of almost 49 years enjoyed traveling and just spending time together.  Tim was a huge Purdue basketball and football fan and rarely missed watching a game on television.  He often attended games with his son, Chris, and grandchildren.

In retirement, Tim and Sue spent the last six winters at Olde Hickory Golf and Country Club in Fort Myers, FL. He loved golfing with his many old and new golfing friends.  In the summer he could be found on a golf course in Indiana with the “Duffers”. To Tim, golf was all about the camaraderie with his buddies.

Tim loved being Grampy to his four grandchildren, Caleb, Tyler, Emma and Kylie.  Each summer Grampy and Grammy took the grandchildren on special adventures.  Each one loved sitting with Grampy in “Grampy’s chair”.

Tim was a member and trustee of First Evangelical Presbyterian Church.  He also served on the Handyman Committee, helping others.  Tim’s quiet faith was reflected in his integrity and his gentle manner.  He was a member of John Purdue Club, the Purdue Club of Clinton County, Frankfort Symposiarchs, Frankfort Jaycees and he served as the 1981 State Chairman of Indiana’s Junior Miss.

He was preceded in death by his parents and an infant sister, Diana Kay Wolfe.