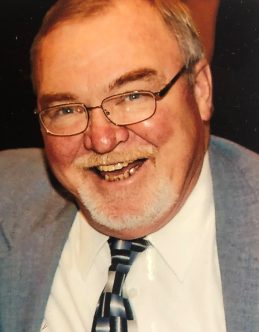 Tom was a 1964 graduate of Frankfort High School and a lifelong Frankfort resident.  In high school he worked at the Frankfort Bakery, making and delivering donuts.  He retired from Prudential Insurance in Frankfort after 25 years, then worked at Wesley Manor in maintenance, he also drove the resident bus and enjoyed playing Santa there.  Tom served in the Indiana National Guard as a medic. He is a member of the First Baptist Church, Men’s Saturday Morning Breakfast Club, and the Frankfort Eagles.  Tom participated in ‘outhouse racing’ at the Trenary Outhouse Classics, was an avid Colts and NASCAR fan, especially enjoyed watching Kevin Harvick and Tony Stewart.  He also enjoyed camping, fishing, hunting, collecting Coke memorabilia, and traveling.

Visitation will be Noon-2 p.m. Tuesday, December 8, 2020 at the First Baptist Church, 301 S. Columbia St., Frankfort. Funeral services will follow at 2 p.m. at the church. Burial will be in Green Lawn Memorial Park. Memorial donations may be made to the First Baptist Church. Out of respect for the health, safety, and comfort of all in attendance, guests will be expected to adhere to current CDC guidelines regarding appropriate social distancing and the wearing of masks.

He was preceded in death by his parents, son, Travis Felty and 3 brothers, Bill, Randle and Don Felty.