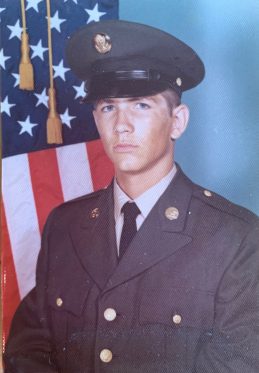 Ted was a 1975 graduate of Sheridan High School.  He served in the United States Army from July 28, 1975 to July 27, 1978.  He worked as a machinist for Biddle Manufacturing for 32 years.  He was a member of the Michigantown United Methodist Church.  He enjoyed hunting, gardening, mushroom hunting, and loved spending time with his 6 grandchildren.

In lieu of flowers, donations may be made to the ALS Association and St. Jude Children’s Research Hospital, with envelopes available at the funeral home.

Visitation will be 4 to 7 p.m. Saturday, April 6, 2019 at the Goodwin Funeral Home, 200 S. Main St., Frankfort.  Funeral Celebration with military honors will begin following the visitation at 7 p.m.  Burial will follow at a later date in Green Lawn Cemetery.

He was preceded in death by his brother: Frederick Mossburg.