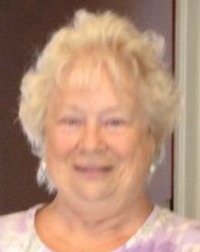 Saundra Kay (Michael) Sherer 75, of Frankfort, Ind., passed away on December 1, 2016 in her home.  She was born on August 31, 1941 in Frankfort to Sam & Julia (Mann) Michael.  She was a 1959 graduate of Frankfort High School.  She married Robert ‘Bob’ J. Sherer on May 30, 1959 in Frankfort and he preceded her in death on May 5, 2005.  Bob was in the military for 20 years and took Saundra and his family to several different locations, including Florida, New York, California and Okinawa.  Saundra and Bob moved back to Frankfort with their family in 1975.  She was a natural artist and applied her talents as a florist to her jobs at Country Custom Baskets, the floral department at Marsh and at Garney’s Florist.  She also crafted wooden objects de ‘art which she sold at Indiana craft fairs. Saundra loved flowers and was an active member of the Frankfort Garden Club.  In past years, she volunteered at the Clinton County Historical Society, and enjoyed designing and creating historical scenes at the museum.

Visitation will be Noon-2 p.m. Wednesday, December 7, 2016 at Goodwin Funeral Home, 200 S. Main St., Frankfort, Ind. Services will begin at 2 p.m. Wednesday at the funeral home. Burial will be in Bunnell Cemetery.