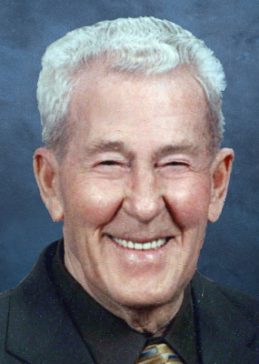 Roscoe (Swisher) Crowell 88 of Frankfort, went home to be with Jesus at 3 a.m. May 29, 2016, his 68th Wedding Anniversary, at Clinton House, where he had been a resident for 5 weeks. Born October 26, 1927 in Frankfort, Ind. to the late Clarence Everett Swisher & Edris (Goodnight) Swisher Crowell.  He married Dora Mae Crowell on May 29, 1948 in Merrillville, Ind. and she survives.

Roscoe attended Frankfort High School.  He retired from Glover’s Ice Cream after 33 years of service.  Before that he worked for Frazier Dairy and had been a farm hand on several farms in Clinton County.  Roscoe was a charter member of the Grace Baptist Church and a 50 member of Jefferson Masonic Lodge.  His military service was in the U.S. Army 9th Air Corp as a Corporal, working as a clerk typist.  He was decorated with a WWII Victory Medal.  His hobbies included hooked rugs, putting puzzles together and keeping his yard well-manicured.

Services will be 11 a.m. Friday, June 3, 2016 at Goodwin Funeral Home, Frankfort, IN, with the visitation beginning at 10 a.m. at the funeral home. Officiating the funeral is Pete McMillin, his grandson. Burial with military rites will be in Greenlawn Memorial Park. Memorial donations may be made to The Gideon’s International.