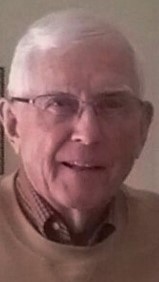 Robert W Stroup, formerly of Frankfort, IN passed away at his home in The Villages, FL on July 28, 2022 with family by his side.  Bob (Tobe) was born on November 23, 1931 in Sharpsville, IN to Gale and Beulah (Hargrave) Stroup.  Bob grew up in Scircleville, IN and graduated from Scircleville High School in 1949.  Bob married Dorothy J Marshall on Sept. 27, 1952 and she preceded him in death on June 30, 2017 after 64 years of marriage.  Robert served his country in US Army National Guard from 1951- 1954 at the rank of Corporal.  During his time of service, Tobe was employed at the Clinton County Farm Bureau Elevator in Scircleville.  During his 41 years of employment with the Co-op, he managed various facilities throughout Clinton County and knew many people involved in agriculture.  Tobe retired on July 1, 1991 from Agmax (Fairground Elevator).

Bob enjoyed gardening, working in his yard, and especially traveling which he did well into his later years.  Bob and Dorothy were members of the Geetingsville Presbyterian Church and Bob maintained his membership in the American Legion Post 12 even after moving to Florida in 2018.

His surviving family felt a deep honor to care for their father during the last years of his life and wish him well on his final trip.

Friends and family may visit from 9 – 10 a.m. on Thursday, August 25, 2022 at Goodwin Funeral Home, 200 S. Main St., Frankfort. A private burial to follow at Greenlawn Cemetery in Frankfort. A “Celebration of Life” will be announced at a later date.

a daughter, Debra J. (Dale) McGuff of The Villages, FL and a son, Richard D. Stroup of Lebanon, IN.

Along with his wife and parents, Robert was preceded in death by four brothers, John E., Gale, Richard B., and Willis F. along with one sister, Loleeta C. (Pete) Mohler.