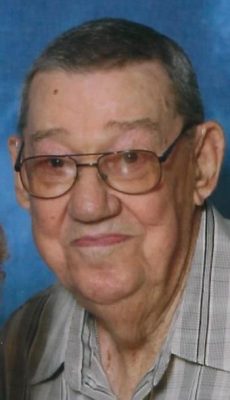 Robert L. Davis, 91, of Crawfordsville, Ind., died September 15, 2019 at Ben Hur Health and Rehabilitation, Crawfordsville.  He was born November 11, 1927 in Cutler, Ind. to William C. & Mary (Biesucker) Davis. He married Marianne Young on September 14, 1950 in Frankfort and she survives.

Robert was a 1945 graduate of Jefferson High School.  He had lived in Mattoon, Ill., From 1952-1968 before moving to Crawfordsville.  A veteran of the U.S. Army, he was one of the first drafted from Frankfort.  He served in the Korean War in Germany.  Robert had worked at Tarnow Pipeline Company for 22 years and then retired from Fauber Construction in Lafayette after almost 20 years.  He was a member of the Youngs Chapel Christian Church in Crawfordsville and the American Legion in Indianapolis.

Visitation will be 4-8 p.m. Wednesday, September 18, 2019 at Goodwin Funeral Home, 200 S. Main St., Frankfort. Funeral Celebration will be 10:30 a.m. Thursday, September 19, 2019 at the funeral home. Burial will be in Bunnell Cemetery. Memorial donations may be made to Youngs Chapel Christian Church.

He was preceded in death by a brother and 4 sisters.