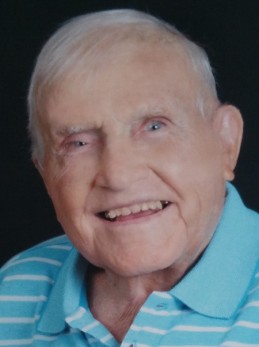 Richard Keith Barnett, 88, of Clinton County, passed away Thursday, February 18, 2016 at St. Vincent Hospice in Indianapolis.  He was born in Clinton County on December 25, 1927, the son of late Paul and Mayme (Morton) Barnett. Richard graduated from Sugar Creek High School in 1947.  Following high school, Richard was drafted into the United States Army in 1954 where he served his country with honor for 2 years at a rank of SP3. He was married to Patty (Ploughe) Barnett on August 6, 1950; she survives. Richard lived in Clinton County his whole life except for his Military service in Alaska.  He was a dedicated farmer and was also a member of the Pickard Masonic Lodge for 60 years.  Richard also was a member of the Scottish Rite, Shrine, The Moose Lodge, and the Kirklin American Legion. He was a devoted husband, father, grandfather, great-grandfather, and uncle.  He loved spending time with his family and attending his grandchildren’s sporting events.  Richard was an avid gardener, found great pleasure working in his yard, enjoyed the out-of-doors, and watching basketball and football on TV.

Visitation will be 2-5 p.m. Sunday, February 21, 2016 at Goodwin Funeral Home. Services will be 10:30 a.m. Monday, February 22nd at the funeral home. Burial will be in Green Lawn Memorial Park. Memorials may be made to the Pickard Masonic Lodge, Kirklin American Legion, 105 E. Madison St., Kirklin, IN 46050 or the Clinton County Humane Society, P.O. Box 455, Frankfort, IN 46041, envelopes will be available.