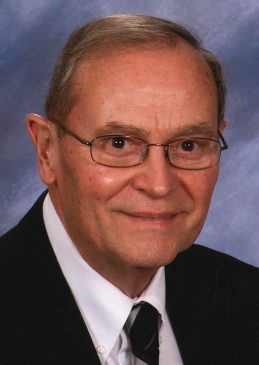 He was a 1951 graduate of Frankfort High School and attended Purdue University.  A veteran of the U.S. Army, he served from 1953-1961.  Richard worked for Norfolk-Southern Railroad as a civil engineer for 36 years, retiring on September 1, 1987.  He was a member of the First Christian Church, where he served as past Deacon & Elder and was in the DIACS’S Sunday school class.  He was also a member of the Clinton Masonic Lodge #54, Ancient Accepted Scottish Rite Valley of Indianapolis and the American Legion Post #12.

Visitation will be 4-7 p.m. Wednesday, February 15, 2017 at Goodwin Funeral Home. Funeral Service will be 10:30 a.m. Thursday, February 16th at the funeral home. Burial will be in Bunnell Cemetery. Memorial donations may be made to the First Christian Church.

In addition to his parents and his first wife, he was preceded in death by a son, Mark Richard Holmes.