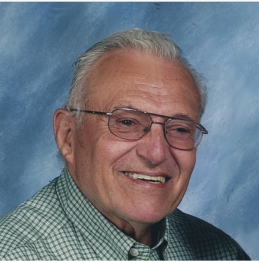 Richard was raised in Westwood, New Jersey and a 1944 graduate of Westwood High School.  He earned his BS degree in Agricultural Economics from Cornell University in 1948 and attended graduate school at Purdue University where he continued his studies in Agriculture Economics.  He was an entrepreneur who “had his fingers in a lot of pies”. His first job out of college was as a writer for a farming magazine, and after graduate school he was a grain buyer for an elevator in Danville, IL.  He moved with his bride to New Jersey to open and co-own multiple restaurants with his brother, with both couples sharing living space above their restaurant. With four children (of their eventual six) ages 3 or under, they moved back to Indiana where Richard made deals to purchase a drive-in theater, then a grain mill, and ultimately landing back in Lafayette as a realtor and later developed and built Wedgewood Mobile Home Park.  Richard went on to have a large presence in the real estate business in Lafayette, buying, selling and renting properties.  He had a heart for people who were down on their luck and made it possible for many people to have inexpensive housing.  Being an avid reader, he modeled to his children and grandchildren how to be a lifelong learner.

Richard attended Community Reformed Church in Lafayette.  He loved trees and planted hundreds of them in his lifetime. Richard’s zeal for card games, cribbage and backgammon were evident in his playing thousands of rounds with family and friends (frequently offering prizes to grandchildren if they could beat him).  Over the course of many years, he and Sharon enjoyed hosting international students from several countries in their home.  Richard and Sharon enjoyed many travel adventures including trips to each continent (except Antarctica) with an especially interesting cruise on the Panama Canal.  Beyond his varied work, games, and travels, Richard took the most delight in his ever-growing family.

Memorial donations may be made to Tippecanoe County Habitat for Humanity, LUM Lafayette Urban Ministry or Alzheimer’s Association. Goodwin Funeral Home, Frankfort, is honored to assist the Haby family.

Surviving with his wife of over 65 years, Sharon, are their children: Susan (Tom) Dinkledine of Russiaville, Connie (Rob) Walsman of Indianapolis, Steven (Diane) Haby of Lafayette, Carol (Vince) Klinker of West Chester, OH, Beth (Joe) Faulkner of Lafayette and Sarah (Bill) Davis of Lafayette.  Also surviving are 25 precious grandchildren, many grandsons-in-law and granddaughters-in-law and 23 great-grandchildren with four more arriving soon.

He was preceded in death by his parents, 2 infant children, brother, Arthur Haby and sister, Elaine Zangara.