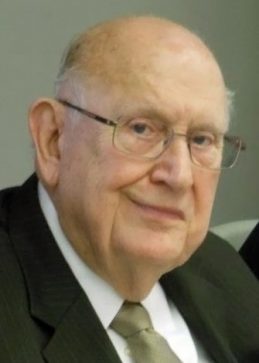 Reverend Paul James Price passed peacefully from this life to his heavenly reward on Thursday, May 5, 2016 in his home, surrounded by his family.  He was born November 15, 1922 to Sherman and Lessie (Kinder) Price, of Frankfort, Indiana, in their home on Blinn Avenue.

Paul was a 1940 graduate of Frankfort Senior High School.  He attended college at Apostolic Bible Institute in Saint Paul, Minnesota where he graduated in 1945.  After graduation, Reverend Price accepted a position to serve as the pianist in an Apostolic church in Akron, Ohio.  Soon after his move to Akron, he met Velma Elizabeth Pamer.  They were married on October 7, 1946.  Together, they began the Apostolic Faith Assembly in Barberton, Ohio in 1950 and served as pastor there for 15 years.

Paul moved his family to Frankfort, Indiana in 1965 and founded the Apostolic Bible Church where he served until his retirement in 2003.  Reverend Price traveled extensively supporting missionaries through multiple Spanish speaking regions of Mexico, Central, and South America.  He also served as the Spanish Ministry Coordinator for the Indiana District of the United Pentecostal Church International for nine years.  He planted Spanish daughter-works in Frankfort, Lafayette, and Indianapolis.