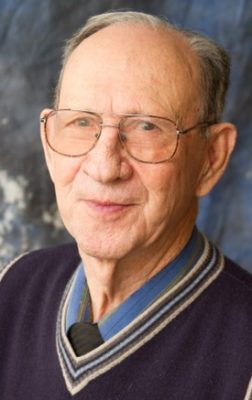 Rev. Lewis Glen Smith, 91, went home December 7, 2016. He was born July 22, 1925, to Minnie and Henry Smith of Crawford County, Indiana. When he was ten years old he got saved while “playing church” in the family barn. He walked away from God and that experience lasted for five miserable years. Then as a fifteen-year-old delinquent, he came back to God. His life and all his goals changed from wanting to quit school to going on to high school with a call to preach.

In 1943 he enlisted with the U.S. army. He fought in World War II under Douglas MacArthur in the South Pacific. He was wounded, and the shrapnel always remained in his neck. He won seven campaign medals, two bronze stars, and received the Purple Heart. He was discharged in 1946.

He attended Frankfort Pilgrim College from 1947-1950, graduating with a three-year ministerial course. While there he began to work in the west end of town in a community without a church. He would walk, ride his bike, and later drive to visit in the homes of “his people.” He was able to get property in this community with donations from others and even using his disabled veterans’ check to support the ministry. With God’s help, he and his helpers were able to have a church built that continues to serve Frankfort, Indiana, since he founded it seventy years ago.

He married Mildred Bowers September 5, 1949. She worked faithfully by his side until Alzheimer’s claimed her mind. He lovingly took care of her until her death in 2001. Rev. Smith preached for seventy years in revivals and camp meetings all over the United States. His last camp meeting to attend was in Phoenix, Arizona, with his daughter Mary Anne in November. He preached his last sermon the night before his accident. He felt privileged to go on missionary trips to Papua New Guinea, the Philippine Islands, Canada, Mexico, Haiti, Costa Rica, South Africa, Lesotho, Honduras, Belize, Jamaica, Turks and Caicos Islands, Guatemala, and various Indian reservations among the Athabascan/Alaska, Manitoba, Lakota Sioux, Navajo, and Hopi tribes. He visited the Holy Land with his son Joe; and his last international trip was to Australia with his son Henry three months ago.

The family will greet family and friends at a viewing from 4:00-8:00 p.m. Monday, December 19, 2016, at the Goodwin Funeral Home, 200 S. Main St. Frankfort, Ind. Funeral service will be 11:00 a.m. Tuesday, December 20, 2016, at Victory Chapel, 196 Lewis Smith Road, Frankfort, IN, with Rev. Joseph Smith officiating. Burial will be in Green Lawn Memorial Park. Memorial donations may be made to Victory Chapel at the address above.

Rev. Smith, or “Smitty” as many affectionately called him, leaves a legacy of loving others, giving God all, and building bridges. He will be missed by his seven remaining children: Dr. Henry (Teresa) Smith of Cicero, IN; Rachel (Rev. James) Meek of Frankfort, IN; Rev. Joseph (Sharon) Smith of Shelbyville, IN; Rebecca (Rev. Kim) Dewhurst of Lexington, KY; Glenda (Rev. James) Barnard of Frankfort, IN; Mary Anne (Rev. Stuart) Wheeler of Phoenix, AZ; and Elizabeth (Todd) Hamilton of Independence, KS; thirty-eight grandchildren, thirty-seven great grandchildren, one adopted daughter Linda Dinkeldein, one brother Bill Smith, one sister Mary Sarles, two sisters-in-law Pearl Smith and Ruth Dommestrup, two brothers-in-law Estes Bowers and Paul Bowers, and many nieces, nephews and cousins, and a host of people who call him their “Grandpa.”