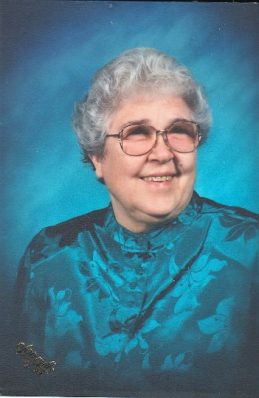 Phoebe Marie Driggs, 90, of Frankfort, died Monday, March 16, 2020 at St. Mary Healthcare in Lafayette, Indiana.  She was born on May 9, 1929 in Mead, Nebraska to Tracy Ellsworth and Elsie (Watt) Mumford, she married Bernard Duwayne Driggs on December 31, 1949 in Omaha and he preceded her in death on November 22, 1996, together they raised three children.

Phoebe was a 1947 graduate of Beatrice High School.  She worked with her husband and was Executive Secretary at Driggs Insurance Agency in Omaha, NE for over 30 years.  She was a member and taught Sunday school and Bible studies at Eastside Christian Church and attended New Life Assembly of God in Frankfort.  Her other memberships included Eastern Star and General Federation of Women’s Clubs, where she held local, district, and state positions.  She was on the Sarpy County Extension Board, and volunteering at the Midlands Hospital where she served on their foundation board.  She was an avid reader and was known to read a book a day.

Visitation will be 6-7 p.m. Thursday, March 19, 2020 at Goodwin Funeral Home, 200 S. Main Street, Frankfort.  A funeral service will follow at 7 p.m. on Thursday, at the funeral home.  Private Graveside Service will be held at Woodland Cemetery in North Bend, NE at a later date.  The family requests that you keep them in your prayers and send online condolences in lieu of being present due to the COVID-19 crisis.

She was preceded in death by her parents and her husband.