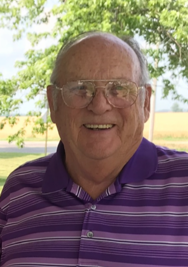 Norman was a 1956 graduate of Scircleville High School and studied Animal Science at Purdue University.  He was Fertilizer Plant Manager for Sohigro and Ag Max, a Territory Manager of Nitrogen Sales for Standard Oil of Ohio, and a family farmer.  He worked in the Chemical Plant Industry for 35 years, retiring in 2003.  He was a lifelong resident of Michigantown and had spent 15 winters in Fort Myers, Florida.

Norman was a life long member of Country Chapel Church of God where he served as an Elder for over 50 years.  He and Dixie were youth leaders for over 15 years.  He was one of the founding members of the Michigantown Lions Club, a member of Michigantown Community Club, served on the Clinton Central School Board for multiple years, and was a 50+ year member of the Hillisburg and Beard Masonic Lodges.  He was an avid sports fan and especially loved golf and being a member of The Duffers Frankfort Golf Group.  He was a fan of all Purdue sports, particularly basketball.  Norman loved life and he especially loved people ~ He didn’t know a stranger.

He was preceded in death by his parents, brother: Sam Huffer, and step-mother: Roselin Huffer.