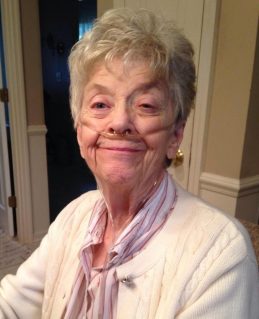 Nancy Jane (Unroe) Clossin, 84, of Frankfort was our mother.  She died on December 6, 2021 at Witham Hospital in Lebanon, Ind.  She was born on December 21, 1936 to Willis “Shim” and Nettie (Swisher) Unroe.  Nancy and her brothers were raised by their working mother.  As children, the family didn’t have much money, but she enjoyed walking the Interurban trail to the city pool and swimming all day.  Along the way, Nancy would “steal” fruit from backyards for her lunch.  She swam so much as a youngster that her blonde hair turned green!

Nancy married our father, Jim Clossin, on March 14, 1953.  Besides raising five kids, she worked at many different places as we all grew up, including Frazier’s Dairy Restaurant, Cream-Rich, Peter-Paul, the Key West Shrimp House and the Clinton County Hospital.

When Nancy was a young mother, she would sometimes drive her children to school on very cold and snowy days.  She would throw on a winter coat over her pajamas and was always nervous she’d have a flat tire.  Occasionally, when Dad was working out of town, Mom would splurge on a Bruno’s pizza and we’d be allowed to eat in the living room!

Mom would likely go unrecognized by her children if she wasn’t in the kitchen.  She was always in there cooking up our favorites – breaded tenderloins, “mom” chili, potato soup with “rivels”, ham salad (with bologna, not ham of course), “good stuff” (creamed eggs) on toast, ducky-duddles (bread with gravy), meat candy (bbq pork cutlets), angel food cake and peanut butter pie.

Nancy and Jim enjoyed many road trips – to California, Florida, and Texas – but Dad would not have listed either “map-reading” or “photography” as one of mom’s talents.

Nancy loved working in the yard – weeding, trimming, and raking – all the stuff most of us don’t love.  She especially loved flowers and she took it as a personal challenge to keep cut flowers alive for as long as humanly possible.

For many decades, our mother insisted on having a Christmas tree larger and taller than any of the rooms in the house.  Our father would eventually break down, get mom the tree, and – armed only with wire, hooks, hammers, and assorted tree-holding contraptions – spend hours cussing up a storm until that tree was conquered.  This annual conflict was a never-ending source of amusement to us, their children.

Our mother, Nancy Jane Clossin, thought Christmas was magical, and she made it that way for her children.

Visitation will be 11 a.m.-1 p.m. Monday, December 13, 2021 at Goodwin Funeral Home, 200 S. Main St., Frankfort.  Funeral service will begin at 1 p.m. at the funeral home.  Burial will be in Bunnell Cemetery. Pastor Paul Whitaker will officiate.

Nancy was preceded in death by her husband: James Lee Clossin; infant brother: Jimmy Unroe; grandson: J.T. Clossin and her mother and father.