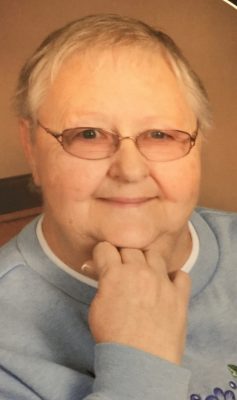 She attended Clinton Prairie High School. She grew up in Mulberry and moved to Frankfort in 1970.  Nancy had worked at Unilectric, Peter Paul/Zachary and the Lighthouse Inn Motel.  She was a member of the Colfax Christian Church, was a former member of Eagles Auxiliary, member of Dorcas Society of Colfax Christian Church, and Oldies but Goodies Bowling League in Lafayette.  Nancy enjoyed babysitting for many years in her home.

Memorial donations may be made to Clinton County Cancer Society.

Funeral Services will be held at 2 p.m. Friday, February 10, 2017 at the Goodwin Funeral Home. Friends may visit from 4-7 p.m. Thursday, February 9, 2017 at the funeral home. Burial will be in Green Lawn Memorial Park.

In addition to her parents she was preceded in death by  a Sister:  Patsy Graham and a Brother: Thomas Shoemaker.