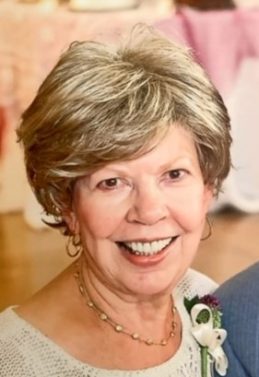 Micky Holmberg was born November 1, 1935 and passed away peacefully at her son’s home on November 13, 2019. She will be missed by family and friends.  Micky was born Mona Louise Hoyer but from an early age has been Micky to everyone she knew.  She grew up in Evanston, IL and spent many fun days on the shores of Lake Michigan. She attended Purdue University where she fondly says she went for her Mrs. Degree.  She married F. Thomas Clark and after Tom’s duty to the Navy was over, they settled in Frankfort, IN and lived on the family farm.  Micky was a successful homemaker, raising 2 children, Anne Clark of Dallas, TX and Jim (Judy) Clark of Frankfort. She took care of the home and children, cooked delicious meals, entertained friends, tended to her vegetables and flowers, and taught many of her friends the art of cooking.  Her talents for cooking and managing a kitchen were eventually sought after by the restaurant industry and it was there that she met her good friend, Gloria Ponton, who has been like a sister to her.  After Tom and Micky divorced, she moved to Indianapolis, married Jim Holmberg (who preceded her in death) and then moved to Martinsville.  While in Martinsville, she developed extensive lily gardens around her home which she loved.  When she moved back to Frankfort, she brought those lilies back with her, and it was her joy to see those bloom every summer. Once she was back in Frankfort, she reconnected with many of her old friends from her early adult years and was thrilled to have spent her last years as a companion to a new friend, Wilbur Lucas.  Micky loved to travel and for many years, Micky and Gloria would take trips a couple of times a year, and in the last few years it was her joy to travel with Wilbur and to enjoy his love and companionship.   A celebration with family and friends was held in August after Micky learned that her throat cancer was terminal, and she thanks everyone for taking the time to visit with her that day; it was one of the highlights over these last few months.  She thanks Wilbur for taking her to see her beloved Lake Michigan so she could dip her toes in the water one more time and for being by her side til the end. And she thanks Gloria for being her best friend all these years; may you continue to have cocktail hour and think of her with a smile. If anyone would like to make a donation in her name, Micky would like for it to be made to the Boys and Girls Club of Clinton County, 1100 West Green Street, P.O. Box 103, Frankfort, IN  46041 so that children can continue to have a safe and fun place to be a kid.

As per Micky's request, no visitation or services are planned.

She was preceded in death by her mother, Anne Knight Hoyer, and her sister, Sara.