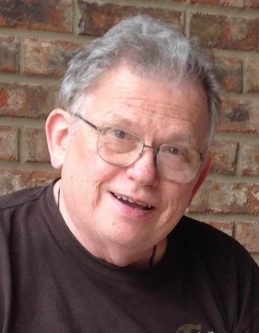 He attended school in Lebanon, Indiana and Verona, Italy before returning to the area and settling in Mobile, Alabama in December of 1958 and attending Murphy High School, graduating June 3rd, 1960.

Mike went on to attend Pensacola Junior College from September of 1960 through June of 1962, after which he joined the U.S. Air Force in April of 1963, receiving an honorable discharge from the Air Force Reserves on February 26, 1969. Mike married Gloria Ann Freeman in Mobile Alabama, in 1962 and divorced 1979. He was employed at Teledyne Continental Motors in Mobile Alabama from August 1967, retiring April 1st, 2001.

Mike was very proud of his family and told stories about his father, mother, step-father, and grandparents as well as other members of his family – particularly his baby sister, Cindy who he deeply adored. He loved to tell stories of Cindy as an infant and his face would light up whenever he mentioned her in any story. He was proud of his children and saved every picture drawn, every school event or graduation program and every note the boys ever wrote to him. He could talk for hours about all members of his family, and the family restaurant (RADER’S located in Lebanon, Indiana), but he would become most animated when telling stories about being a young boy in Italy and the ruckus he and his best friend would stir up while riding around town on their bicycles. One of his favorite past times was to sit and go through old photographs and tell stories about the people and places in the photos.

Mike had a particularly impish personality and a great sense of humor; he loved teasing friends and family mercilessly.

You cannot really discuss Mike as a person without talking about the great joy he took in his relationship with his Jack Russell rescue dogs, Rowdy and Shadow – he even referred to them as his kids. The dogs brought him endless joy and companionship. He was so grateful to Cindy for bringing them into his life when he really needed that relationship.

Mike was active for many years in the square/round dancing community and very much enjoyed participating in and calling the dances. He had every color kerchief you could name and sported the color to match his date’s dress along with his favorite boots.

Mike had many interests such as a life-long interest in aviation. He enjoyed showing pictures of different airplanes and explaining what made each one special. He always enjoyed tinkering with electronics and computers. But no hobby was greater than his love for all things NASCAR and Jeff Gordon…. the whole world came to a stop when it was time for the race of the day!

Mike’s boyish grin and the way his eyes would light up when he was teasing someone or when he was telling stories about his family were stolen from us by Alzheimer’s, but while his memories may have been stolen from him, we each have our own special memories of him we will forever hold in our hearts.

The family wishes to offer a special thanks to the Entire Staff at William F. Green Veterans Home, and especially the staff of “F” Wing for their dedication, care, and respect provided to Michael Rader. A heartfelt thank you to Ms. Marquta, Ms. Shelia, Ms. Traci, Mr. Michael, Ms. Gloria, Ms. Ethel, Ms. Lesandra, Ms. Kim, and Ms. Vanessa. Also, a special thank you to Ms. Laura, Ms. Laine, and Chaplain Mike from Kindred Hospice (Daphne Alabama) for the care, and comfort in Mike’s final days.

A visitation will be held at Pine Crest Funeral Home (1939 Dauphin Island Parkway, Mobile, Alabama 36605) November 3rd from 2 pm to 6 pm, with a second visitation at Goodwin Funeral Home (200 South Main Street, Frankfort Indiana 46041) on November 5th from 1 pm to 3 pm, followed by a graveside service in Green Lawn Cemetery (496 West Country Road 200 South, Frankfort, Indiana 46041). In lieu of flowers, memorial donations may be made in the name of Michael Rader to: Keep Memory Alive (keepmemoryalive.org) in support of the Cleveland Clinic Lou Ruvo Center for Brain Health or The Alzheimer’s Association (alz.org)