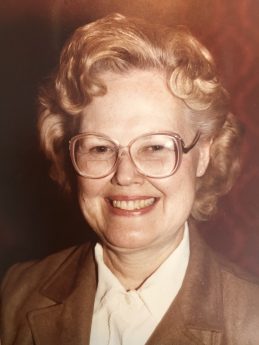 Maxine E. Lindhorst, 97, of Michigantown, died April 18, 2020 at Wesley Manor.  She was born February 19, 1923 in Herrick, Illinois to Roy Forest & Blanche Maxine (Palmer) Myers.  She married Bill Adams and he was killed in action during WWII, she then married Charles Edward Lindhorst Sr., on August 3, 1946 and he preceded her in death on February 23, 1987.

Maxine was a 1941 graduate of Madison High School in Illinois.  She was USPS Postmaster in Michigantown, retiring in 1986.  Prior to being postmaster, she worked as a bookkeeper for Davis Fence Company and Youngs Insurance.  She was a member of the New Life in Christ, now known as Heart of Fire Ministries.  She loved her Lord & Savior with all her heart and shared Jesus with everyone.  She was a Proverbs 31 wife, mother and grandmother.

A special thank you to Guardian Angel Hospice, Pastor Ken Rushing, and all the loving nurses and healthcare workers at Wesley Manor, that were so dear to her.

The link to watch the graveside service for Maxine follows:

Family and friends are invited to meet at Goodwin Funeral Home, Wednesday, April 22, 2020 between 9:15-9:30 a.m. to join the procession to Whiteman Cemetery. A graveside service will be held at 10 a.m. at Whiteman Cemetery. Pastor Tony Prathaftakis will officiate. The graveside service will be recorded and a link will be provided on our website following the service. Memorial donations may be made to Heart of Fire Ministries, 3000 E. Wabash St., Frankfort, IN 46041.

She is united in Heaven with her parents, spouses, a daughter Jean Anne Heilman and one great grandson.