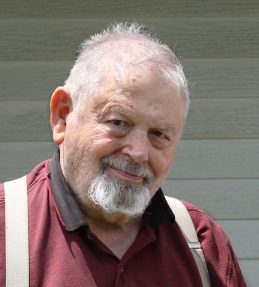 Known to his friends as “Morrie,” Maurice spent his childhood in rural South Dakota.  His father Herman, the manager of the Western Electric central office in Aberdeen, kept the family in relative comfort and security during the Great Depression, getting around surprisingly well despite losing his lower leg to a railroad accident. His mother Amada kept house and raised the two children, Morrie and his older sister Peggy.

Morrie learned telephone communications working for his father, from splicing wire at the head office to climbing poles from a young age.  Morrie and his father added to the family dinner table, fishing in the many ponds and lakes, as well as hunting the abundant duck and pheasant that filled the prairie.

Both children saw neighbors leave to fight in World War II, although neither were old enough to serve their country at the time.  Shortly after his sister Peggy left home to earn a commission as an Army nurse, 19-year-old Morrie joined the Naval Reserve while in high school, then went active duty a month after the end of the Korean War.  With his practical experience at his father’s telephone office, Morrie was a natural at the Navy’s Interior Communications “A” School that taught installation and maintenance of shipboard wired telephones.  He then served on the USS Iron County, a Landing Ship-Tank (LST) based in San Diego that served in the Pacific with ports of call in Alaska, Korea and French Indochina.  He reached the rank of Petty Officer 3rd Class, E4.

Morrie stayed in telephone communications, working for his father immediately after his Honorable discharge, then branching into the more profitable career of sales, soon advancing to the title of “Sales Engineer” for multiple suppliers of telephone cable and switching hardware.

Shortly after returning to the Dakotas, Morrie met the former schoolteacher Audrey Romereim.  Married a year later on October 6, 1956, the couple had two children, David and Kari. The demands of his career forced multiple moves, with the family living in North and South Dakota, Illinois, Minnesota, Montana, and New York, before settling in Indiana, where all family members apart from Morrie earned college degrees, paid entirely by Morrie.

A deeply religious man, Morrie was active in whatever church he attended in his hometown.  He served as a lay leader in both the Roman Catholic and Lutheran churches, presiding over Sunday School and Bible classes as well as adult “Deeper Walk” courses and retreats.  His final church home was St. Paul’s Lutheran Church in Frankfort.

In his later years as well as in retirement, Morrie took his family on trips to the most interesting and memorable places he could choose.  His vacations ranged from the spectacular sites of the United States such as the Grand Canyon, Yellowstone, and the Badlands of South Dakota, to world-spanning destinations in Barbados, Norway, Chile, and Egypt.

A memorial service will be held at a later date.

Maurice Strobel is survived by his wife Audrey, who resides at Wesley Manor, his son David Strobel of Tampa, Florida, his daughter Kari Ragsdale of Lebanon, four grandchildren and two great grandchildren.

In addition to his parents, he was preceded in death by his sister, Peggy Strobel.