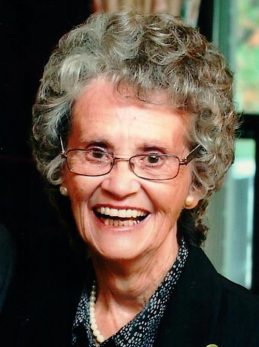 Mary Ruth Welch, 83, of Michigantown died April 15, 2018, at 2:35 p.m. at Mulberry Health and Rehabilitation Center.  Born February 8, 1935, in Rose Hill, Virginia, to Cecil & Esther (Fletcher) Marcum.  She married Armour C. Welch on July 5, 1953 in Tazwell, Tenn. and he survives. Mrs. Welch was a 1952 graduate of Thomas Walker High School in Ewing, Virginia, and was Salutatorian of her class.  She was a homemaker and also worked at Mallory and Peter Paul and was involved in 4-H Beef Cattle, enjoyed crocheting, canning, sewing, and especially loved her grandchildren.

Visitation will be 4-7 p.m. Wednesday, April 18, 2018 at Goodwin Funeral Home, 200 S. Main St., Frankfort. Services will be 11 a.m. Thursday, April 19th at the funeral home. Burial will be in Green Lawn Memorial Park. Memorial donations may be made to Clinton County Cancer Fund or Alzheimer/Dementia Research, envelopes will be available.

In addition to her parents, she was preceded in death by a brother, Robert Kyle Marcum.