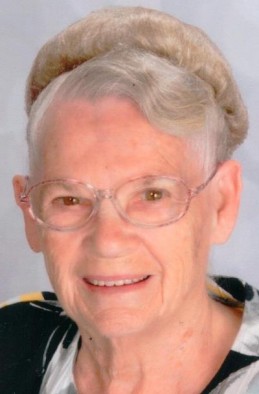 Mary M. Henderson 88, of Frankfort, IN, went to be with the Lord on Thursday, December 17, 2015.  Born March 28, 1927 in Clinton County to Ralph Clinton & Lillie Mae (Thomas) Pyatt.  She married Marvin Henderson on July 11, 1942 in Clinton County and he preceded her in death on July 26, 1998.  Mrs. Henderson received her GED from Frankfort High School and was a lifelong Clinton County resident. She worked for Peter Paul for 17 years, retiring in 1983. Mrs. Henderson was a member of the Christian Life Church. She enjoyed baking, cooking, square dancing and crocheting. While living with her daughter, Kay for the past three years, she was given special care by her grandson, Josh Richie.

Visitation will be 4-8 p.m. Monday December 21, 2015 at Goodwin Funeral Home. Services will be 11 a.m. Tuesday, December 22nd at the funeral home. Pastor Phillip Jordan will officiate. Entombment will be in Clinton County Mausoleum in Green Lawn Cemetery. In lieu of flowers, the family asks that donations be made to the Alzheimer’s Association.