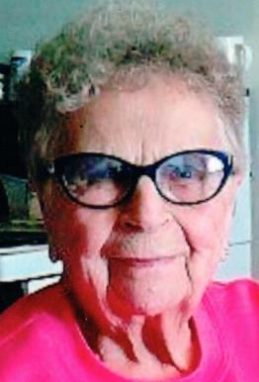 Mary Louise Cook 101 of Frankfort, died at 11:25 a.m. October 6, 2016 at her home.  Born August 8, 1915 in Jefferson, Indiana to Ora Earl & Loretta Ethel (Leighty) Timmons.  She married Robert Wilson Cook on January 29, 1941 in Los Angeles, Cal., and he preceded her in death on November 19, 2000.  Mary was a homemaker.  She also served as a counselor for the National Youth Administration and later worked as an inspector for Douglas Aircraft in Santa Monica, Cal.  In 1951 she began working at the National Cigar Factory in Frankfort, working there for 24 years, retiring in 1976. She had also worked at the Clinton County Recorder’s Office.  Mary was honored as the oldest living student of Riley elementary school.

Visitation will be 6-8 p.m. Monday, October 10, 2016 at Goodwin Funeral Home. Services will be 11 a.m. Tuesday, October 11th at the funeral home. Ray Disinger will officiate the service. Burial will be in Green Lawn Memorial Park. Memorial donations may be made to I.U. Health Hospice or Diabetes Association.

In addition to her parents and husband, she was preceded in death by a daughter, Martha, son, Bradford, an infant son, 2 grandsons, Brandon and Anthony, 10 sisters and 2 brothers.