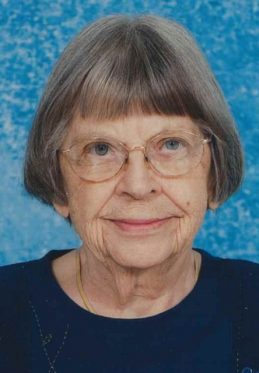 Mary was a 1939 graduate of Frankfort High School.  She married Orten M. Adair on September 21, 1940 and he preceded her in death on March 8, 2010.  Mary was an avid reader, accomplished seamstress, excelled at knitting and enjoyed a good game of bridge.  She volunteered for school organizations, March of Dimes, served as a Girl Scout leader, a former member of Beta Sigma Phi, St. Matthew United Methodist Church, Friends of the Frankfort Public Library.  Mary retired from the Frankfort Public Library in 1979 after 15 years.   She moved from Wesley Manor to Ohio in 2011 to be closer to her family.

Graveside services will be 2 p.m. Wednesday, April 12, 2017 at Bunnell Cemetery. Interment will be at Bunnell Cemetery. Goodwin Funeral Home is assisting the family with arrangements. Memorial contributions may be made to St. Matthew United Methodist Church, Wesley Manor or Friends of the Public Library.

In addition to her husband, she was preceded in death by her father, mother, step-father, Gentry Russell, brother Jackson Sheridan and nephew Scott Sheridan.