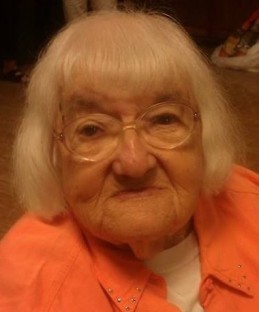 Martha F. Unrue Ray 91, of Frankfort, IN, died at 7:50 a.m. Sunday April 20, 2014 at Wesley Manor. Born August 21, 1922 in Clinton County, daughter of the late Ora & Ella (Ruch) Unrue. She married Joseph Edgar Ray on April 5, 1941 and he preceded her in death on May 26, 1993. Mrs. Ray had lived in Clinton County and attended Kilmore, Scroggy and Frankfort Schools. She was a member of the First Baptist Church in Frankfort. A homemaker, she loved sitting outside and loved watching people, birds and cars. She enjoyed the Paul Phillippe Resource Center. Martha had been a resident at Wesley Manor for the past 8 ½ years and enjoyed the many activities there, especially BINGO. She loved all the care givers at the Manor.

Visitation will be Tuesday, April 22, 2014 from 4-7 p.m. at Goodwin Funeral Home, 200 S. Main St., Frankfort and one hour prior to the service. Service will be 11 a.m. Wednesday, April 23rd at the funeral home. Pastor Chuck Williams will officiate. Burial will be in St. Luke Cemetery, Frankfort. Memorial donations may be made to the First Baptist Church or the Paul Phillippe Resource Center.