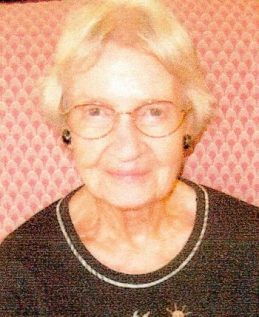 Martha C. Faust, 99, of Frankfort, died at 9 a.m. March 13, 2017 at Wesley Manor. Born March 10, 1918 in Knox County, Vincennes to Herbert & Florence (Jordan) Decker.  She married Frederick E. Faust on April 29, 1944 in Vincennes, Ind., and he preceded her in death on April 2, 2010.  Mrs. Faust was a graduate of Lincoln High School in Vincennes and attended Business College in Vincennes.  She worked for Indiana Bell in Vincennes and Washington D.C. and Mallory’s in Frankfort.  She was a member of the Delta Theta Tau Sorority.

Visitation will 12:30-1:45 p.m. Monday at Wesley Manor Chapel. Graveside services will be 2 p.m. Monday at Bunnell Cemetery. In lieu of flowers, memorial donations may be made to Guardian Angel Hospice or the Frankfort Public Library.

In addition to her parents and husband, she was preceded in death by a daughter, Carolyn Jean Wolfe in 2014 and son, Joseph Alan Faust in 2015.