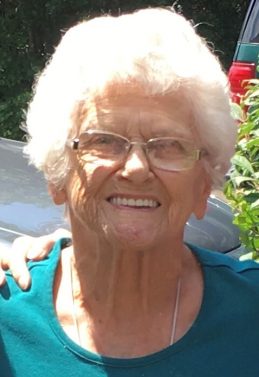 Marjorie Lou Timmons, 94, a former Clinton County resident, passed away on Friday, March 25, 2022 at Story Point Senior Living, Prospect, KY.  She was born in Galveston, Ind. to Harry Wesley & Elsie Irene (Ronk) Hosier.  She married Clarence Elvin Timmons on June 30, 1946 in Logansport, Ind. and he preceded her in death on January 15, 2005.

Marge attended Galveston High School.  She lived most of her life in Clinton County, moving to Prospect in 2008.  She had worked at Wesley Manor as head of housekeeping for over 20 years, retiring in 1993.

A private family graveside service is planned. Burial will be in Bunnell Cemetery.

In addition to her parents and husband, she was preceded in death by a son, Michael Lee Timmons, brothers, Charles, Junior, Paul, Donald and Ronald Hosier and sisters, Anna Warner, Juanita McHale, Barbara Gearheart, Carolyn Kratzert and Donna Baxter.