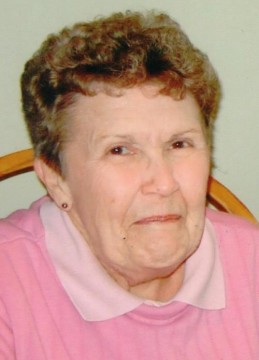 Marcella J. “Marty” Nickols 84, of Frankfort, died at 7 a.m. October 21, 2015 in Wesley Manor.  Born May 29, 1931 in Indianapolis, IN to the late Arnold E. & Eula D. (Reed) Jines.  She married Marvin J. Nickols in Indianapolis on Nov. 4, 1950 and he preceded her in death on May 25, 2012.  Marcella was raised in Indianapolis and was a graduate of Arsenal Tech High School. She moved to Frankfort in 1950. She retired in 1981 as a Supervisor with Meridian Insurance Company in Mulberry, IN. She was a member of the Women of the Moose. Marcella enjoyed family gatherings, and spending time with her grandchildren and great grandchildren.

Visitation will be 12 Noon -2 p.m. Friday, October 23, 2015 at Goodwin Funeral Home. Funeral Services will begin at 2 p.m. at the funeral home. Entombment will be in Clinton County Mausoleum at Green Lawn Cemetery. Memorial donations may be made to Clinton County Humane Society or Wesley Manor Good Samaritan Fund.