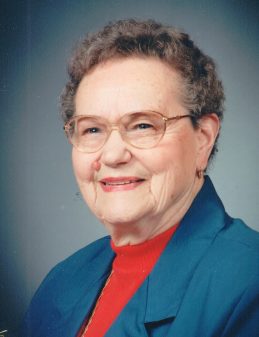 Louise Helen Nolan, 95, former Frankfort resident, passed away May 10, 2017 at the Catherine Kasper Home in Donaldson, Ind.  She had been a resident of Marshall County for the past 3 years.  Louise was born in Ireland, Ind. October 29, 1921 to Albert A. & Nora (Jerger) Mehringer.  She was the third of five children.  Louise married Charles H. “Red” Nolan on November 29, 1945 and he passed July 21, 1979.  They spent their early married life in Jasper, Indiana before moving to Frankfort.

Louise was a member of St. Mary’s Catholic Church in Frankfort.  She was former owner/operator of Midway Liquor Store.

Louise enjoyed gardening, reading, watching sports and taking care of her house.  She was widowed after her last child left college.  She lived an independent life until she was 92.  The family is grateful to the folks at Maria Center in Donaldson for prolonging her independent lifestyle and to the caregivers at the Catherine Kasper Home who made her final time as good as it could be.

In addition to her parents and husband, she was preceded in death by her brothers and sisters, Mary Eckele, Esther Schmit, Owen Mehringer and Sylvester Mehringer.