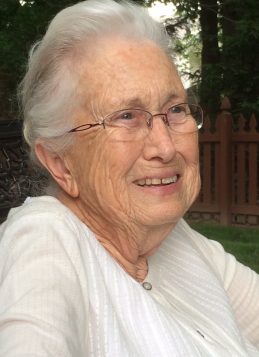 Lois Ruth (Price) Fishback passed peacefully from this life to her heavenly reward on Sunday, November 13, 2022, surrounded by her family. She was born December 15, 1929, to Sherman and Lessie (Kinder) Price, of Frankfort, Indiana in their home on Blinn Avenue.

Lois was a 1948 graduate of Frankfort High School where she was yell leader on the cheerleading squad and met her high school sweetheart, Merrill Fishback. After graduation, her first job was in Akron, Ohio where she worked in an office, taking shorthand.

Merrill and Lois were married in 1949. They had three children, Gary, Paula, and Rhonda.

They owned and operated Kelley Road Stables beginning in 1966 where they boarded horses of their own and for their community.

In 1965, Apostolic Bible Church (Christian Life Church) was started in the living room of their Kelley Road home with her brother, Rev. Paul Price, as pastor.

Lois was employed by Mallory Controls in Frankfort for 19 years starting in 1956.

Lois and her husband felt the call to be missionaries to Colombia, South America in 1976. They worked very hard to learn Spanish. Then, they established El Instituto Bíblico Apostólico (Apostolic Bible Institute) in Bucaramanga, Colombia, in January of 1980 and later in the coastal city of Barranquilla.

While continuing the work in Colombia, they were asked to help the church of Moroleón, Mexico and nearby works. They continued in missionary work until 1997.

Lois was a very kind and caring person. After her husband’s death in 1998, Lois cared for her brother, Herb Price, who was in failing health. She later cared for her sister, Joan Weiler, and after that she took care of her niece, Reita Price.

Lois enjoyed shopping, going for rides or just plain going wherever the car would take her. She loved music; hymns, choruses and Big Band songs from her high school days. She loved to travel. She and Merrill enjoyed many trips to Colombia, visiting other missions prior to becoming missionaries themselves. Her happiest times and greatest joys were with her family.

Services will be on Saturday, November 19, 2022, at Christian Life Church, 2501 E Wabash Street, Frankfort. The viewing will be from 11am until 1pm at the church with the funeral service beginning at 1pm. The graveside service will immediately follow at Bunnell Cemetery.

She is survived by one son: Gary (Virginia) Fishback of Frankfort, two daughters: Paula (Alfonso) Suárez of Frankfort, and Rhonda (Mark) Mealick of Zanesville, Ohio, also 9 grandchildren and 12 great-grandchildren.