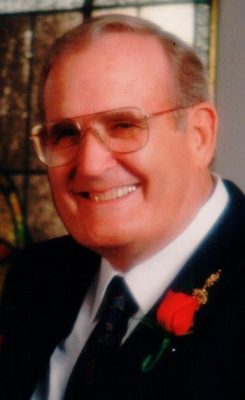 Joseph A. Neal 88 of rural Frankfort died at 6:52 a.m. Thursday, December 29, 2016 at Wesley Manor.  He was born September 23, 1928 in Clinton County to Harold S. & Mary Marjorie (Woods) Neal.  His marriage of 69 years was to Lena Mae Ramsey in Clinton County on January 26, 1947 and she survives.  Joe was a 1946 graduate of Jackson Township High School and a lifelong Clinton County resident.  He was a lifelong farmer and owner of Cyclone Grain.  He was a member of the Antioch Christian Church and the Jefferson Masonic Lodge Vesta #136.  Joe loved hunting, tractor collecting and antique trucks.

Visitation will be 3-8 p.m. Tuesday, January 3, 2017 at Goodwin Funeral Home. Funeral services will be 1:30 p.m. Wednesday, January 4th at the funeral home. Burial will be in Green Lawn Cemetery. Memorial donations may be made to the Antioch Church or Guardian Angel Hospice.

his parents and a brother, Russell Neal.

37 Condolences for “Joseph A. Neal”