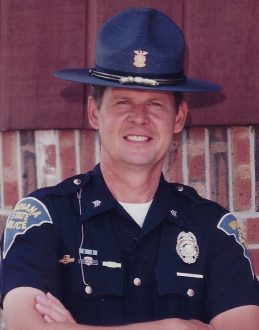 John was a 1959 graduate of Linden High School, attended Purdue University, and graduated in 1966 from the Indiana State Police Academy in Bloomington Indiana.   He began his appointment with the Indiana State Police September 1, 1966 and was assigned initially to the Indiana Toll Road.  In 1970 he transferred to the Indiana State Police post in Lafayette and retired September 3, 1991 with the rank of Sergeant.  John was also a lifelong grain farmer beginning at age 10 driving loaded grain trucks to the elevator in Kirkpatrick IN and ending 70 years later mowing bottomland and providing advice and counsel to nephew Wes Hickox who farmed by his side for the last 20 years.  He served in the U.S. Army Reserves from 1963-1969.  He was a 50 plus year member of the Jefferson, Indiana Vesta Masonic Lodge #136.

his parents and a son, Russell.