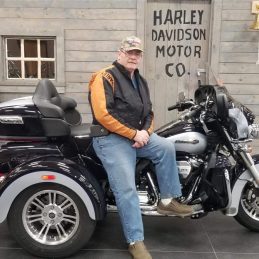 John Edward Davis, 65, of Frankfort, Ind., died unexpectedly July 3, 2022 in his home.  He was born on November 7, 1956 in Noblesville, Ind. to Arthur Eugene and Eva Irene (Greathouse) Davis.  He was previously married to Paula (Earl) Davis and she survives.  He married Angela (Angel) Myers and she preceded him in death in 1986.

John retired as a Master Sergeant after 20 years of service in the United States Army.  Following his military service, he settled in Frankfort.  He earned his GED while in the military.  He was a truck driver for Bailey Trucking in Frankfort followed by Brenda Trucking.  His memberships include the Frankfort VFW, American Legion, Eagles, NRA, ABATE Motorcycle group and the Harley Davidson Group.  He enjoyed traveling, being on his motorcycle, being outdoors, but his greatest joy was being with his grandchildren, especially his great-granddaughter.

He was preceded in death by his parents, daughter: Michell Davis, and brother: Kevin Davis.