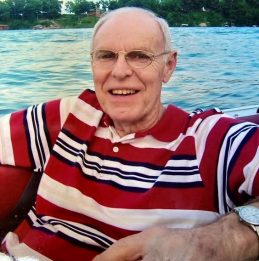 Jack was the third of eight children (two sons and six daughters: Earnest, Mary Jane, Grace Marie, Donna, Maxine, Bertha, and Helen). Early in life Jack developed a passion for all things sports related. He was a three sport athlete at Greensburg High School in Greensburg Ohio. As the Quarterback and Defensive Back, he was named to the Akron area All-Suburban football team his senior year. His senior year in basketball saw him set his high school scoring record with 39 points in a game (before a 3 point shot existed). He was also the leading scorer in the Akron District 1953-1954 (a feat he liked to mention was later repeated by Lebron James). In the spring of his senior year, he went to the state finals in both high jump and Pole vault to compete at the Ohio State Stadium in Columbus Ohio.

Jack attended college at Anderson College in Anderson, Indiana. There he made many lifelong friends, and sports again played a large role in his college life. He lettered 11 seasons in college (Basketball-4, Track-4, Football-2, Cross country-1). He was named to the all 1950’s decade football team as an end/receiver and defensive back, he started on the varsity basketball team and once had 41 points for Anderson in a game. In Track and Field, Jack competed in the broad jump, high jump and pole vault, and held the high jump record at Anderson for about 10 years.

Although sports kept him very busy, he also met his wife of 42 years on the campus of Anderson College, Dorothy Olive Foster from Vinita Oklahoma. They married on August 1, 1959. After graduation, they lived in Greensburg Indiana, and then moved to Noblesville Indiana where Jack was a teacher and coach. Jack got his Masters Degree from Ball State and became a Principal in the Sheridan Indiana school system and while working on his PHD, found himself named the Superintendent of the Sheridan school system at age 29, the youngest Superintendent in the state. Jack and Dorothy and their two children Jeanette (1961) and John (1965) moved to Frankfort Indiana in 1973 where he held roles as the Superintendent and Business manager. Jack retired in 1997 and he and Dorothy moved to Clearwater, Florida.

Outside of Jack’s professional life, he was a lifelong gardener, typically coming home from work and taking off his suit and tie to put on work clothes and spending time in the garden, orchard, vineyard and strawberry patch digging in the dirt.

Jack’s passion in life was centered around his faith. A strong believer and Christ follower, he lived his life as a testimony to his Creator. He and Dorothy were very active in every church they attended, with Dorothy leading in the music worship and Jack teaching in Sunday School and filling in at the pulpit when needed. His biblical knowledge was extensive and he spent his entire adult life studying the Word. In his 80’s he was still developing lesson plans on Powerpoint and Adult Sunday school curriculum.

Jack had a great sense of humor, if you were his friend, he would tease you and loved it when you teased him back. He was a kind and devoted loving husband and father and will be missed by his family and friends.

You may also visit www.sylvanabbey.com to view photos or share a memory with the Bloom family.

His wife Dorothy preceded him in death in 2002.