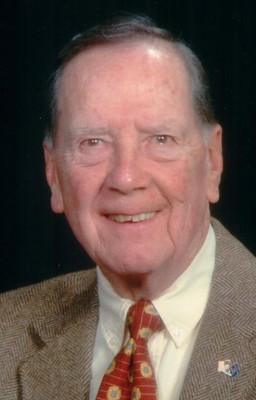 Mr. Knoll was a 1941 graduate of Frankfort High School and attended Indiana University. He served in the United States Navy in the South Pacific during World War II from 1942 to 1944. Jack was the Vice President of Clinton County Bank & Trust for 29 years, retiring on March 10, 1985. He had previously worked for Swift & Co. Soybean Mill for 9 years. A member of First Christian Church, he was also a member of the Military Order of the Purple Heart, VFW Post 1110, American Legion, Tin Can Sailors, Inc., Disabled American Veterans, Four Stack APD Vets, “The Green Dragons”, Moose Lodge #7, Elks Lodge #560 and a former member of the Frankfort Lions Club. He also enjoyed golfing and spending time with his family.

Visitation will be from 5 to 7 p.m. on Tuesday, January 14, 2014 at Goodwin Funeral Home. Services will be Wednesday, January 15th at 10:30 a.m. at the funeral home. Burial with Military Honors will be in Green Lawn Cemetery. Memorial Donations may be made to First Christian Church or the charity of the donor's choice.

his wife: Wilma and one sister: Ann Burns