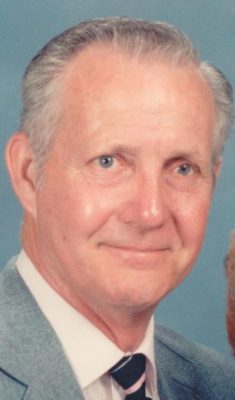 John E. Howe 84, of Frankfort, IN, died at 1:47 a.m. April 25, 2016 at I.U. Health, Lafayette, IN.  Born December 20, 1931 in Frankfort, IN to Luther & Lela (Simpson) Howe. He married Evelyn Nelma McCarty in 1953 in Forest, IN and she preceded him in death on February 19, 1971.  He then married Virginia (Cockrum) Moore on July 28, 1972 in Indianapolis and she survives. Mr. Howe attended Frankfort High School.  He joined the U.S. Navy, serving in the Korean War from 1949-1953.  John worked at Pearson Ford in Zionsville, IN, then at Lewis Ford in Frankfort as a service manager for over 25 years.  He was a member of the Christian Life Church.  John enjoyed military history, reading, gardening, yard work, fishing, woodworking and especially enjoyed his grandchildren.

Visitation will be Wednesday, April 27, 2016 from 4-7 p.m. at Goodwin Funeral Home, 200 S. Main St., Frankfort, IN. Services will be 10:30 a.m. Thursday, April 28, 2016 at the funeral home. Burial will be in Bunnell Cemetery. Memorial donations may be made to the Christian Life Church Building Fund, 850 Delphi Avenue, Frankfort, Indiana 46041; envelopes will be available at the funeral home.