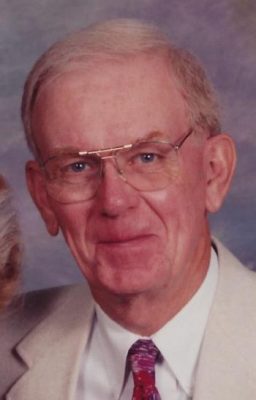 Mr. Norris was a 1943 graduate of Frankfort High School and a graduate of Indiana University with a business degree.  A veteran of the U.S. Army from October 12, 1943 to April 20, 1946, serving in Europe during WWII.  Mr. Norris lived in Frankfort his entire life and was a member of St. Matthew United Methodist Church.  He was longtime owner of Norris Printing and Office Supply in Frankfort.  He was an avid golfer and gardener, a member of the former Frankfort Country Club and the Frankfort Kiwanis Club.

A funeral service celebrating John’s life will be held on Wednesday, July 10, 2019 at 2:00 p.m. at Goodwin Funeral Home, located at 200 S. Main St. in Frankfort with Pastor Phil Lake officiating. Burial will follow at Frankfort’s Bunnell Cemetery. A visitation will take place prior to service from 12:00 p.m. to 2:00 p.m. at the funeral home. Memorial donations may be made to Alzheimer’s Association with envelopes available at the funeral home.

In addition to his wife, he is preceded in death by a daughter, Janet Norris in 2009.