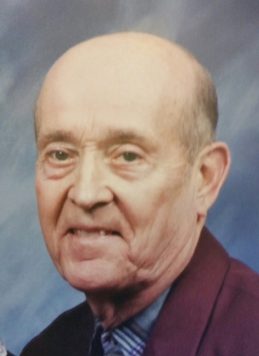 John C. Martin Jr. 91, Frankfort, IN. died January 25th, 2017 in the Indiana Veteran’s Home in West Lafayette, IN. Mr. Martin was born November 29th, 1925 in Frankfort to John C. and Ruth (Knauss) Martin. He married Velma I. Shannon on August 6th, 1949. She preceded him on October 6th, 2002. He then married Dorothy (Schoman) Jackson June 10th, 2007 and she survives. He was a 1944 Frankfort High School Graduate and then was drafted into the United States Army at the young age of 17; PFC John C. Martin Jr. was wounded and captured by the Germans in WWII and became a POW for 3 months. Mr. Martin walked in the Battle of the Bulge and later received a purple heart and many other medals. Later in life, John worked at the Light Plant in his hometown and then at the Frankfort Water Works where he retired in 1991. John was a life member at the VFW, the American Legion, and the Eagles. He was an active member of Faith Family Ministries Church, and later became a member of Frankfort’s Seventh-day Adventist Church.

Memorials may be made in John’s honor to the Frankfort VFW Post 1110, 309 North Main Street, Frankfort with envelopes available at the funeral home.

Services will be held at 2 p.m. Sunday, January 29, 2017 at the Goodwin Funeral Home in Frankfort.  Visitation will be from 4-7 p.m. Saturday, January 28, 2017 along with visiting one hour prior to the service on Sunday from 1-2 p.m. at the funeral home.  Pastor Ken Thompson will officiate.  Burial will follow services in Green Lawn Memorial Park.