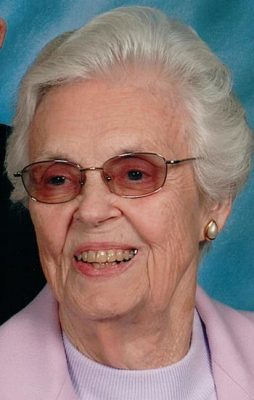 Joanne Record, 88, of Frankfort, died at 9:14 p.m. November 21, 2016 at Clinton House Health and Rehabilitation. Born July 5, 1928 in Indianapolis, Ind., to the late Howard & Pearl (Michael) Wilson.  She married Gilbert Spencer Record on March 7, 1948 and he preceded her in death on December 3, 2008.  Joanne was a 1946 graduate of Michigantown High School.  She worked for her father at WLC Company in Sedalia in the office, and was a Tupperware sale representative.  Joanne formerly attended the Jefferson United Methodist Church and Trinity United Methodist Church.  She was a former member of Clinton O.E.S.

Visitation will be 1-3 p.m. Saturday, November 26, 2016 at Goodwin Funeral Home. Funeral Service will follow at 3 p.m. at the funeral home. Ed Pearson will officiate the service. Burial will be in Bunnell Cemetery. Memorial donations may be made to Trinity United Methodist Church.