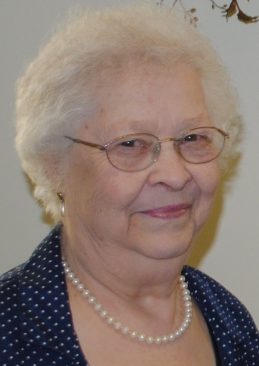 Janet Rhine, 87, a former Frankfort resident, died February 1, 2020 at her home in Noblesville, Ind.  She was born May 3, 1932 in Frankfort, Ind. to the late George Adam Henry & Estella Belle (Beard) Stewart.  Janet was the youngest of twelve children, who all preceded her in death.  She married Glenn A. Rhine on August 12, 1948 and he preceded her in death on October 19, 1984.

Janet attended Frankfort High School.  She received her GED and became a QMA and was very proud of these accomplishments.  She was beautician, also worked at Marsh, Wesley Manor and did private home care.  She enjoyed crocheting, sewing, scrabble, gardening, played the violin, accordion, piano and banjo.  Janet loved her children and grandchildren.

Visitation will be 5-7 p.m. Thursday, February 6, 2020 at Goodwin Funeral Home, 200 S. Main St., Frankfort, Ind. Funeral celebration will be 10:30 a.m. Friday, February 7, 2020, at the funeral home. Reverend Rich & Carol Schenck and Reverend Gordon Smith will officiate. Burial will be in Bunnell Cemetery. Memorial donations may be made to the First Church of the Nazarene Church.

In addition to her parents and spouse, she was preceded in death by 2 sons, Larry Dane Rhine in 2008, Tarry Dale Rhine in 2012, and son-in-law, Roger Spencer.