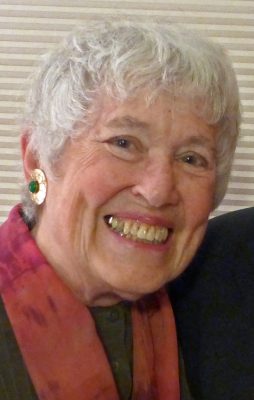 That famous laugh has moved heavenward. As many have often said, “You may not have heard of Jane Clark, but you probably have heard Jane Clark.” Jane’s contagious (and loud) laugh brought many a smile to peoples’ faces. Jane passed away on July 9, 2022, after a brief stay at Wesley Manor in Frankfort, Indiana. She will be dearly missed by her family.

Whether she was tutoring students in chemistry or physics, coaching kids with their 4-H demonstrations, creating incredible Halloween costumes for her children and grandchildren, working on Origami and flower-arranging projects, or reading pop-up books to her grandchildren and great-grandchildren, Jane always shared her energy, joy and laughter with those around her.

Jane Parmeley Gorham was born on October 10, 1936, in Goshen, Indiana, to Dow M. and Mary (Yoder) Gorham. She graduated as Valedictorian from Goshen High School in 1954. After high school, she attended Bradford Junior College in Haverhill, Massachusetts, for one year, and then went on to earn a degree in Chemistry at Purdue University. Jane received her teaching license at Colorado College in Colorado Springs. While at Purdue, she was a member of Kappa Alpha Theta sorority. It was at Purdue where she met the man with whom she would share 63 years of marriage: Russell J. “Pete” Clark.

After college, Jane and Pete lived in Alameda, California, while Pete was in the Navy and Jane worked as a chemist in a local laboratory. They then moved back to the family farm in rural Frankfort, with Jane taking on the new role of farm wife. There were some humorous and challenging times after the move to the farm for a city-kid scientist. But Jane began working on her beautiful flower gardens and settled into their farmhouse and farm life.

Jane was active in many organizations over the years – the Daughters of the American Revolution, Antioch Church Choir and decorating for church functions, Kappa Kappa Kappa service sorority, Red Barn Theatre Board of Directors and 4-H, where she served as a leader.

The family wishes to thank the following people who helped Jane in these last few years of her life:  Joanne Seip, Jill Grimes, Brittany Boyett from Visiting Angels and the staff at Wesley Manor G-Wing.

A Private Graveside Service will be held for the family. A Celebration of Life event (with plenty of laughter) will be announced at a later date. Contributions in Jane’s memory are preferred to the Antioch Church Building Fund, 4625 South State Road 39, Frankfort, IN 46041.

Along with her husband, Jane is survived by her daughter, Catherine Coston, of Elwood, Indiana, and son, Dave Clark (Robin), of rural Frankfort, as well as her grandchildren – Caitlin Coston of Lowell, Massachusetts; Justin Coston (Melissa) of Noblesville, Indiana; Tara Coston of Grand Lake, Colorado; Georgia Clark of Denver, Colorado; Darby Clark of Columbus, Ohio; and Stuart Clark of Charlotte, North Carolina. She is also survived by her great-grandchildren – Rowan, Coraline, Quenton and Aella Jane Coston of Noblesville; brother-in-law, Tom Clark (Sharon); several nieces and nephews; and multiple cousins.